An internal fund to find innovative solutions to accelerator technologies

A new fund to support innovation in accelerator technologies 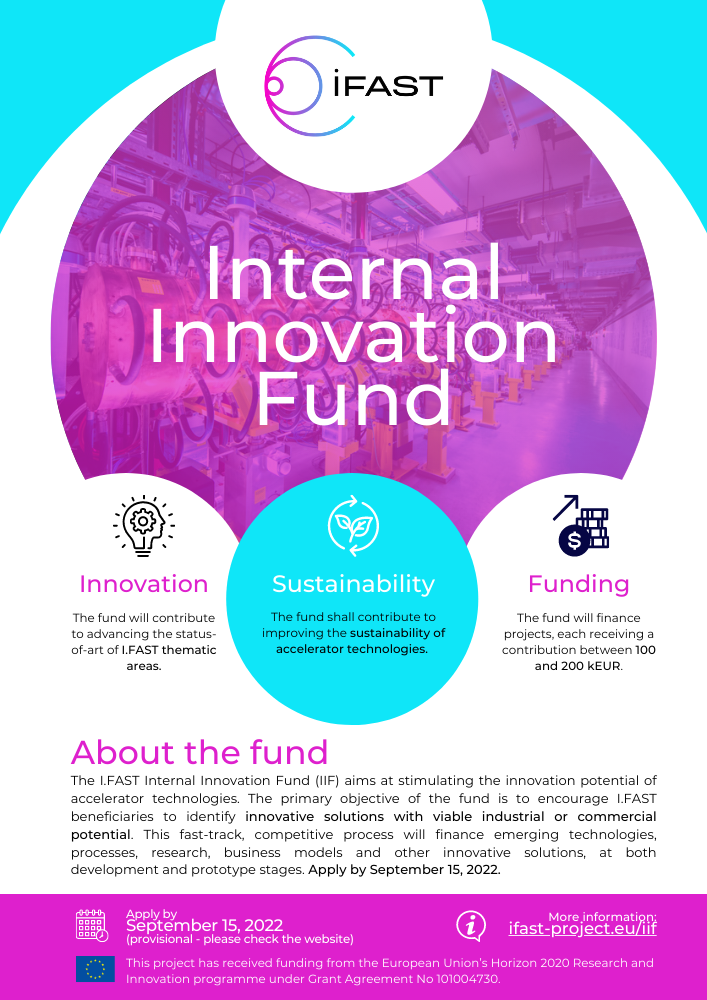 The I.FAST Internal Innovation Fund (IIF) aims at stimulating the innovation potential of accelerator technologies. The primary objective of the fund is to encourage I.FAST beneficiaries to identify innovative solutions with viable industrial or commercial potential. This fast-track, competitive process will finance emerging technologies, processes, research, business models and other innovative solutions, at both development and prototype stages.

The fund will finance projects, each receiving a contribution between 100 and 200 kEUR.

Who can apply to the IFF?

The IIF projects are eligible only if at least one industrial partner and one I.FAST beneficiary are present in the consortia.

What is the aim of the IFF?

The IIF projects are fast-tracked, competitive and innovative projects sponsored by WP4 in I.FAST. The objective of the IIF is to encourage I.FAST beneficiaries to identify, describe, propose and/or pitch novel innovations, emerging technologies, processes, research, business models and other innovative solutions with viable industrial or commercial potential which can influence or address the general technical platform of IFAST (accelerator technologies), at the same time improving sustainability and reducing environmental impact of accelerator technologies.

A special competitive advantage is allowed to proposals able to attract interests, and resources, from different industrial partners and that have a development plan in place (i.e. participation to EU competition grants).

What are the area of interest and funding ?

The proposals must be related to the key Thematic Areas of I.FAST and shall require from I.FAST a financial contribution between 100 and 200 kEUR. Additional financial contributions by the partners (“matching funds”) will be positively considered in the evaluation but are not specifically required. Being IIF an internal fund, the participation of at least one I.FAST beneficiary into the project team proposal is mandatory. Also at least one industrial partner must be identified and participating to the development of the project. The IIF fund contribution to the project will be channelled via the participating IFAST beneficiary.

Sustainability of future accelerators is an important pillar of I.FAST and a contribution to improving sustainability of particle accelerator technologies is a requirement for IIF proposals. Here sustainability refers to the ability of developing technology in line with the commitments taken by European Commission (EU Green Deal) and by its Member States. Technologies supported by the IIF shall be capable of advancing the status-of-art of the related IFAST thematic areas and at the same time being able to address the challenge of reducing environmental impact, thanks for example to reduced electricity consumption and/or footprint of accelerators, or of significantly improving their performance for an equivalent impact, or of directly preserving the environment using accelerator technologies.

The I.FAST thematic areas potentially of interests include:

The IIF foresees to work on an idea that will make the innovation and technology transfer potential evident to the market and so secure, for example, a spin-out (seed or venture finance) or licensing opportunity or provide the necessary information to bid for other support. This often takes small amounts of funds to enable activities essential for preparing a robust business plan. We are most interested in deployment-ready technologies, but we will consider promising approaches of technical maturitiestill TRL4 (validated in laboratory). We will facilitate contact and interactions between I.FAST partners and active researchers or technology developers in the community network. We are interested in submissions and novel concepts from all individuals in academia and research, provided they are I.FAST beneficiaries or can team with at least one I.FAST beneficiary.

The idea or concept must have a clear potential for industrial or commercial application and sometimes a background patent will have been filed, although this is not a requirement and may not always be applicable. Applicants should include an explanation of how they plan to manage IP in the project.

The IIF funding can be used for:

IIF funding will specifically not support:

What are the rules?

Participating to the IIF competition involves accepting all the deadlines and rules as they are described in this page and into the other documents that are referenced here. I.FAST, in accordance with general principles of fairness, impartiality and transparency, reserves the right to add, change or modify, cancel or amend all or any part of the rules as it deems fit and without notice, by announcing it on its web site. It is responsibility of the submitting party to remain informed. In case of any dispute it will be to the I.FAST Governing Board to emit the final decision. The IIF projects are eligible only if at least one industrial partner and one I.FAST beneficiary are present in the consortia. The awarded projects duration cannot extend over the duration of IFAST project, which is scheduled to end in April 2024.

How do I submit a project idea?

Each proposal must include information under the headings below, to be submitted before the deadline of September 15, 2022.

The documents to be completed are:

The pitch document relative to the submitted project shall report on:

What is the funded research that will form the basis of this project? What is the aim of this application? Who will benefit from this project and subsequent industrialization or commercialisation?

Provide an account of the current status of the technology you are proposing and the plan for development. The summary should provide sufficient detail for the Evaluation Panel to assess fully the technical aspects of the proposed project.

Detail specific work packages, assigning responsibility between partners if appropriate. Applicants should show that they have identified risks and developed alternative strategies to mitigate these. The applicants should consider both technical, programmatic and, where relevant, commercial risks.

Detail which sector, in addition to the accelerator domain, can be impacted by the research. What are the potential target audience and applications in different markets. Report on market data, the current and projected ones. Detail how your project will improve sustainability and environmental impact of accelerator technologies, and/or contribute to Sustainable Development Goals.

Describe how you will investigate the development of a business plan, which will include a route to market or of a plan to transfer the technology to industry. Describe the commercial opportunity, supported if possible by market data. Include a summary of the current IP position. Describe the predicted investment, business relationship and other mechanisms required post-project to take forward industrialization.

State the resources requested by the applicants and provide justification for them. The Panel can reduce resource requests if they feel there is insufficient justification.

Identify what the direct outputs will be at the end of this grant (please be specific), and possible intermediate Milestones to be used to verify implementation.

Do I need a letter of support?

Letters of support can be included from other relevant parties not directly involved in the project but who support the objectives and future development, for example, potential end users. Letters will not count towards the page limit. Letters should:

The above described pitch document must be uploaded after the completion of the web page submission form.

At the deadline of the call, the Evaluator panel will evaluate the submitted proposals. The evaluation will include 2 rounds: a first round, digital, based on the eligible pitch received, which will be scored according to criteria of innovations, impact and quality, as reported in the excel table here. A second round with in-person presentation from the Projects admitted will score as well, and with the same criteria as above, the added information that will be communicated in a 45 minute presentations.

To the second round of evaluation will be admitted only the first 10 submitted projects.

In both rounds, all the pitches will be competitively scored according to the same criteria reported in the excel table reported. In the second round will be awarded for funding a definite number of projects till the maximum fund capacity of 1.000.000 Euro will be reached.

Indeed, each project can request a maximum contribution of 200.000 Euro, therefore the number of selected projects will be regulated by the relative score and by the total requested fund.

The awarded projects will be notified by the I.FAST Governing Board, and all the 10 projects admitted to the second round of evaluation will be publicly announced on the I.FAST webpage, representing a unique opportunity for a show-case of the technology to the large I.FAST community, facilitating possibilities of development and exploitation also off the IIF context.

What is the deadline for submitting?

The IIF precise schedule will be reported in the IFAST webpage. Tentative dates (subjected to possible changes) so far are:

Please, check the I.FAST IIF webpage constantly to verify any change in the dates reported above.

Except where specified otherwise, the Deadline for submitting a proposal shall be 11:59 PM Geneva time, on date of Submission Close or Deadline (“Deadline”) reported on the IFAST webpage.

To request support or in case of questions please contact Marcello Losasso: Marcello.losasso@cern.ch

To request support on the online form please contact us here.